An XROMM Study of Food Transport and Swallowing in Channel Catfish 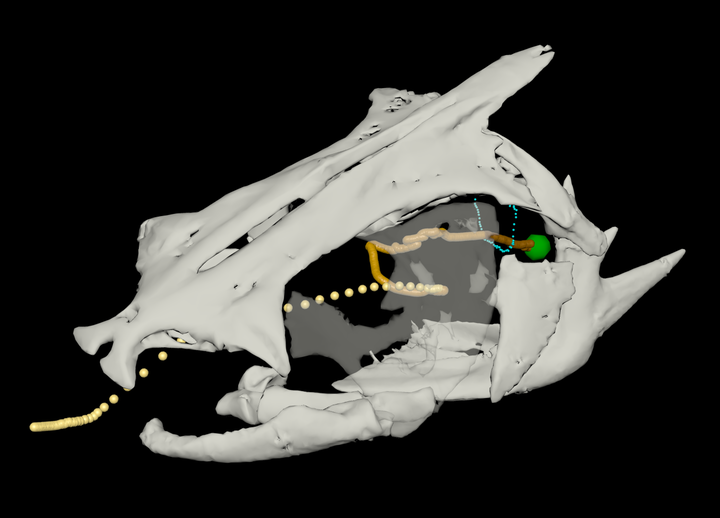 Most predatory ray-finned fishes swallow their food whole, which can pose a significant challenge, given that prey items can be half as large as the predators themselves. How do fish transport captured food from the mouth to the stomach? Prior work indicates that, in general, fish use the pharyngeal jaws to manipulate food into the esophagus, where peristalsis is thought to take over. We used X-Ray Reconstruction of Moving Morphology to track prey transport in channel catfish (Ictalurus punctatus). By reconstructing the 3D motions of both the food and the catfish, we were able to track how the catfish move food through the head and into the stomach. Food enters the oral cavity at high velocities as a continuation of suction and stops in the approximate location of the branchial basket before moving in a much slower, more complex path toward the esophagus. This slow phase coincides with little motion in the head and no substantial mouth opening or hyoid depression. Once the prey is in the esophagus, however, its transport is surprisingly tightly correlated with gulping motions (hyoid depression, girdle retraction, hypaxial shortening, and mouth opening) of the head. Although the transport mechanism itself remains unknown, to our knowledge, this is the first description of synchrony between cranial expansion and esophageal transport in a fish. Our results provide direct evidence of prey transport within the esophagus and suggest that peristalsis may not be the sole mechanism of esophageal transport in catfish.