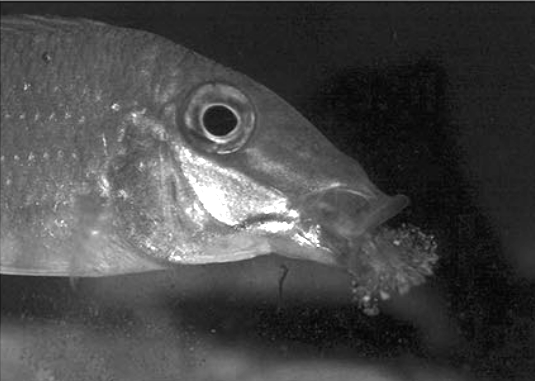 Winnowing is a foraging strategy common in geophagine cichlids (Cichlidae), in which sediment is sifted for food in the oral cavity. Geophagines have modified pharyngeal structures that function in winnowing, although detailed anatomical and functional information is still needed to clarify the mechanisms by which these fishes obtain food by sifting. With this study, we explore geo- phagine winnowing kinematics and variability of winnowing phases to test whether this is a highly modulated or stereotyped behavior. Winnowing was characterized with high-speed video of an archetypal winnower, Satanoperca daemon, which employs a three-part feeding behavior involving strike, winnowing, and sediment ejection. Over the course of feeding events, fish exhibited rapid reversal of hydraulic flow within the oral cavity and remarkable versatility during the winnowing stage. We also explored how cranial morphology varies within the clade across a phylogenetic hypothesis for the group. Cranial morphologies were analyzed in 19 species across 12 geophagine genera; principal component analysis suggests a particular winnowing morphospace exploited differentially by species. Central conclusions of this study are that the strike and ejection phases are stereotypic (low variation) but that rhythmic winnowing is highly variable. Winnowing in geophagines is not directly analogous to winnowing in surfperches (Embiotocidae), to which it is often compared. There is substantial morphometric variation across the clade, even between winnowing species. The wide range of anatomical and biomechanical variants in this diverse clade provides intriguing insight into an underexplored feeding strategy.